Scientists Have Succeeded To Transfer Memory And Create Artificial Memory

According to the Science Daily report, Prof. Dr. David Glanzman from the University of California Integrated Biology, Psychology and Neurobiology department and his team transferred memory from one snail to another with RNA in their study on sea snails called Aplysia.

Within the framework of the study, a group of snails were given 5 electric shocks in 20 seconds intervals from their tails, this action was repeated 5 more times after 24 hours. While the shocks developed the snail's retraction reflex, it was observed that the retraction lasted an average of 50 seconds in the electric shock given samples when they were tapped, and one second in the control group.

Scientists placed RNA, which was removed from the nervous system of snails the day after the electrical shocks, into 7 non-schocked animals. It was observed that these animals also acted as if they were schocked and continued the retraction action for about 40 seconds.

It was considered that the findings of the study, of which were published in the journal "eNeuro", may pave the way for the development of new methods in the treatment of traumatic memory.

Glanzman said "I think we can use RNA in near future to relieve the effects of Alzheimer disease, or to treat post-traumatic disorders".

Semi-Conductive, Flexible Polymer With The Right Electronic Properties Was Created For The First Time 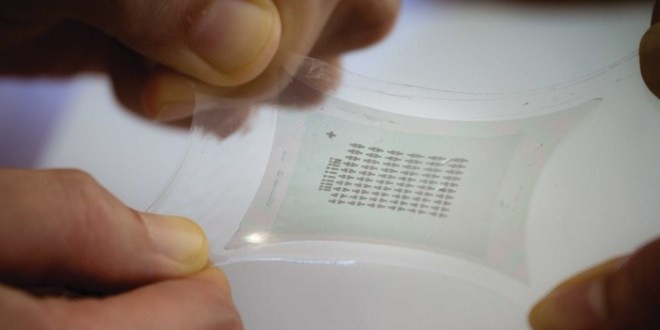 A Semi-Conductive, Flexible Polymer With The Right Electronic Properties Was Created For The First Time. For the first time, researchers have created a flexible polymer with the right electronic properties that will play an active role in transistors. Moreover, the polymer can recover when it is damaged. The new polymer has an electronic performance equal to amorphous silicon, the material used in transistor arrays that control liquid crystal display pixels. And this even preserves electrical performance by stretching to double of its original size (Nature 2016, DOI: 10.1038 / nature20102).

There are several approaches for developing stretchable electronics, Zhenan Bao, a Chemical Engineer from Stanford University, and his group developed this polymer. One way to do this is to bind semiconductor thin parts, hard materials such as silicone onto a rubbery material, and connect them with serpentine metal wires.

Another way to produce flexible electronics is to use self-stretching electronic materials. Although this method requires more work to develop brand new materials, it promises better mechanical stability and easier production. Bao stated that circuits, sensors and displays produced with printed layers of polymers tensioned from the insulator to the heart of the semiconductor of the conductor-transistor may be cheaper. 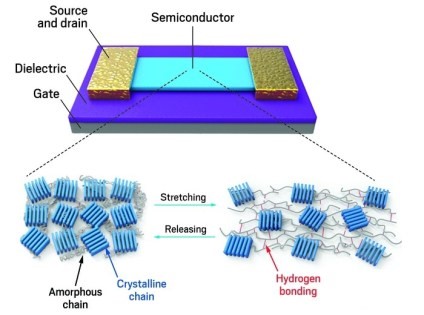 Bao explains the situation as "The typical design rule for stretchable materials is to make them softer and less crystalline". But to be a good semiconductor, a polymer should typically be highly crystalline and tough; this means that these materials are prone to cracking.

The Stanford group solved this contrast in two ways. They began with a polymer containing diketopyrolopyrrole units or DPP, which become the carbon-carbon double bonds crystallized polymer and tough. To make it a little more fluid, he made versions with fewer double bonds, substituting up to 5-10% without compromising the electronic features of DPP.

The team then combined a more elastic polymer fragment, which could form hydrogen bonds, with 2,6-pyridine dicarboxamide. Thus, when the polymer is stretched, it breaks these bonds and absorbs mechanical energy. The bonds are rearranged when it releases stress.

Material scientist and founder of the MC10 from Urbana-Champaign University of Illinois, John Rogers says "Flexible mechanics and efficient electrical charge transport usually don't go together.  In this study, Bao's group developed clever chemicals that seem to capture both properties in one material.".

Qibing Pei, who works in the field of stretchable electronics at the University of California, Los Angeles says "Stretchable polymer conductors and insulators already exist. The main challenge has been to synthesize an essentially stretchable semiconductor." Now, he adds: it looks like Bao's group achieved this.