WHAT DO YOU FEEL IF A TOADY RUSSIAN ROBOT SHAKE YOUR HAND?

- Did you shake the hand of any robot in your life?

- Did any robot take your photo?

- Did you dance with any robot in your life ...

I did all three of them last week.

Let me tell you my impressions.

Tolga Şaşık, the CEO of the university, and a robot welcomed me at the door.

Before the CEO opened his mouth, the robot extended his hand.

I stretched my hand with an automatic reflex and shaked it ...

- His hand was like a human hand. His hand wrapped was like that of a slightly distant person.

- It just made you feel as if you had a mechanical glove on your fingers.

- Then he said, "How are you?" with a voice of neither just like a human nor mechanic.

- Weirdly, even though we just met, I called him "informal you", instead of "formal you" and said, "Do you know me?"

He said "formal you" and started telling me as ...

Then we danced together.

Of course, I was adopted instead of him ...

We became a good duo with the robot.

BEING A STUDENT IN AN ITALIAN TOWN LIKE BELLAGIO

I heard about NİŞANTAŞI University a lot.

So, I was wondering.

The university services in the newly established 1453 region at the bottom part of Maslak. There is a very interesting and revolutionary educational design of 130 thousand square meters on the first 3 floors of a huge building.

There are 3 floors, each consisting of 30 thousand square meters.

Each floor is designed as if it were city streets built indoors.

There are boutiques and classrooms around the street in the middle.

So, you feel like you live in the neighborhood in the ‘Avrupa Yakası’ TV series. There are laboratories right next to the classes.

This design reminded me of the huge artificial Bellagio town established in Bellagio and Caesars Palace hotels in Las Vegas.

Even though you walk around the building, you feel as if you are walking in a real town.

GIVING 35 THOUSAND TL TO THREE STUDENTS AND ESTABLISHING A COMPANY

One of the departments that impressed me the most was the hall where startup students worked.

The university established companies each involving three students and gave them 25 thousand TLs of capital.

These children come together, corporate and develop various projects.

Then they take trainees with them. They are so excited ...

I spent an afternoon with them and listened to their projects.

A UNIVERSITY LIVING TOGETHER WITH THE DISTRICT THAT IT IS LOCATED

Nearly 25 thousand people live in the region where the UNIVERSITY is located.

The university has around 40 thousand students.

People living nearby also had the right to benefit from the university's facilities. They could come and eat in their restaurants and sit in their cafes.

I know Levent Uysal, the founder of the university and the chairman of the foundation, from his executive years at Turkcell and Türk Telekom.

He also worked during the foundation years of E-Kolay.

I knew him as a visionary person.

I realized that Turkey is a country ready to fly, when I saw this university and this brand-new concept brought by him. 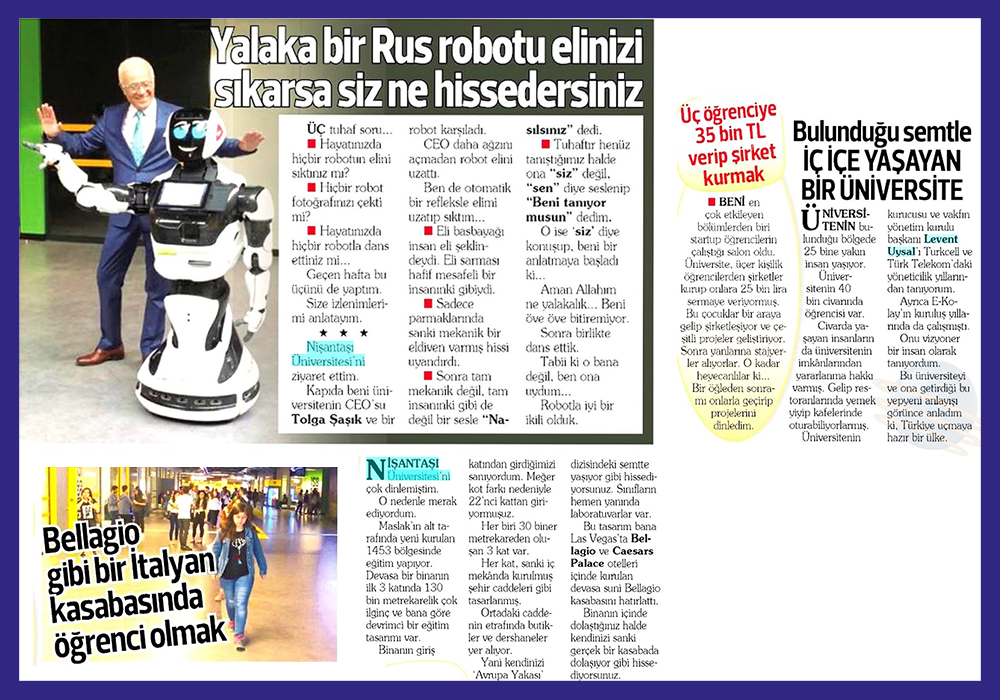